Wu and the Journey.

I am Wang Cheng. Although I am 40 years of age now I well remember my childhood. Chinese parents were allowed to have only one child as the population was growing out of control. The government were very strict about this. If parents went ahead and had two or more children, families could be split up, fined, or punished in other ways. All my friends were from single child families. This meant that all eyes were on the one child. Grandparents, parents, uncles, aunts, they were all watching and tutting about my behaviour (and that of my friends in their own families). There was a lot of pressure to behave ‘just so’ to try to please everyone. I must say I did my best to make my family happy. I liked it when my grandma put her hand on my shoulder and said to me “Wang, I am very proud of you!” Or when my father took me fishing for the day because as he said “I know you can behave yourself, not like your friend Wu. What are his parents thinking of letting him come and go and do what ever he likes to do?”

My friend Wu was my hero. I just loved the way he was so bold and daring. He did things I did not have the courage to do. I was always afraid that someone might tell me off. I was afraid of tearing my clothes or getting dirty, or of trying anything new in case I could not do it well, and my parents would be disappointed in me.

Wu’s parents had plenty of money but not much time, so they employed maidservants to look after Wu. Actually it was a string of maids that they had one after the other. These girls were very inexperienced in looking after children and they would just let Wu do what he wanted to do. He learned that if he screamed and shouted they would agree to let him do almost anything.

Wu decided he was going to have his own circus. He set up a wire in his backyard with the help of the gardener. It wasn’t very high, just a few centimetres off the ground. He soon discovered that it was quite easy to balance on it and to walk along it. When he fell off it didn’t matter as the ground was very close. He told me I should have a go, but I was afraid as usual. It would have been easy enough but I didn’t want to get drawn into his tricks. 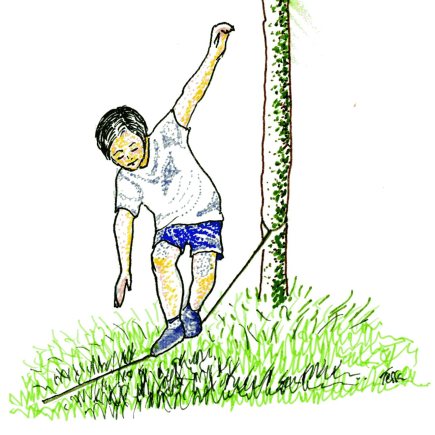 Soon the gardener helped Wu to raise the wire a bit. It was as high as the seat of a stool now. He could still walk along it and if he fell off he had a safe way of falling, he said. I told him he should show his parents, they would be proud of him.

‘No,’ said Wu, ‘they don’t care what I do. They are so busy working they are too tired to bother with me.’

Wu very much wanted his parents to care about what he did, so he started to dream up a plan. He didn’t think they would care for all his circus skills, his juggling, somersaults and high wire act. He decided to save his money and go on a train journey and then they would have to go and find him. They would have to take some time off work and go looking for him. He liked that idea.

‘You must come with me’, he said to me, ‘ I’m off to Chengdu. I have an uncle there. I don’t know exactly where he lives but someone will know him I’m sure.’

Wu told the maid what his plans were. Of course she didn’t believe him as he was always making up stories. He used to lie about all sorts of things to get attention. She just said  ‘Chengdu is a very big city, you will get lost there. You don’t even know where you live yourself let alone where to find your uncle!’

Wu stopped and had a think. ‘Well, will you write my address down for me so when I want to come back I can show the ticket man at the station?’

The maid laughed at his game and wrote his address down on a piece of card.

‘Look after it,’ she said, ‘or you might never come back!’

Wu came to find me to take me with him on his journey. I refused to go. I thought it was a bad idea although I would have loved to have gone with him. I thought my parents would be too worried if I just went off.

Wu disappeared. I ran to tell my grandma what had happened. She had heard so many things about what Wu had said he was going to do, but never did.

She said, ‘Don’t worry Wang, he’ll be back for his supper.’ I was not so sure.

That night Wu’s father came knocking at our door.

It was unusual to see him, he usually sent the maid to our place to bring Wu back for his meals.

‘You mean you let him go?’ said Wu’s father.

‘Wu has told us so many fanciful things about what he is going to do, I have never tried to stop him because he never does them anyway and because it’s not my place to stop him. It is his parents place – yours.’ Grandma replied.

Wu’s father went red and then he turned white. He looked afraid. ‘He said he was going to catch the train?’

‘That’s what he said, but I didn’t believe him, where would he get the money for a ticket?’ said my Grandma.

Wu’s father rushed off. His wife had recently sacked the previous maid for stealing money. Perhaps Wu has been stealing the money.

Much later Wu told me about what happened that day. He had set off on the train to Chengdu. People were curious about him. They all wanted to know where he was going. They said he was too young to travel alone. He told them he was going to stay with his uncle.

‘Where does your uncle live?’ asked a woman kindly.

‘I don’t know,’ said Wu, ‘someone will know him. Someone will tell me where he lives when I get there.’

The whole carriage has been listening, they burst out laughing; some looked concerned, and some laughed cruelly .

The kind woman asked Wu where he lived. He showed her the piece of card.

‘Where are your parents?’

‘They work all day.’

She looked at his nice clothes and shoes. ‘They will be worried about you, you should go home.’

The woman looked at the piece of card with Wu’s address on it. ‘I know this place,’ she said, ‘I will take you home.’

They left the train at the next station and climbed onto one going in the opposite direction. Wu was relieved to see his own station, a place he recognised from meeting his father when he had been away. They started to move through the crowds.

‘ Wu!’ He heard his father’s voice shouting his name. Well, he went home with his father, the kind lady disappeared, and Wu cried all the way home.

His father did not know what to say but gradually the whole story came out and Wu’s parents realised that their son was brave and clever, but needed more of their time and attention. He needed their guidance about telling the truth and about stealing. He needed to know about having a good reputation, or a bad one. His parents had to explain that if you do things which give you a bad reputation people will not trust you. They may not believe what you say when it is really true. You may find yourself in danger, as Wu nearly did. He needed to know that they appreciated his skills that he worked so hard at. Everyone needs praise and guidance when they are growing up. His grandma came to stay a while so that the family could sort themselves out.

Why did Wu want to make the journey to Chengdu?

Did he tell anyone he was going?

Why did they not believe him?

What did Wu’s father realise when he found Wu at the station.

What things had Wu done that you would not do?

What do children need from their parents and carers?

This site uses Akismet to reduce spam. Learn how your comment data is processed.

A Story on Cyberbullying for Kids of 10 – 13 years

Being a good businessman. A story about honesty for teenagers

Gopi the generous cow. A story for children of 6-10 years old

The Elephant Man. A story about being helpful, for children from 5-9 years

A story about empathy. Keeping Betsy Dry. For children 5-10years

Missing the Train (A story on punctuality for teenagers)

The Day the Ladder Slipped (a story about telling the truth)

Ferret boy – a story about respect for one another