A story from Calling Horse

You must nor commit murder

When I was a young man and had performed my initiation into adulthood, I was one of number of young braves who learnt together and who went through the rites and ceremonies together. We were a happy band with one exception. There was a young man who always seemed to have a cloud hanging over him. He came from a family which had lost their father . Their mother had had to bring up the children herself and had not had any support from a man. She had four young sons who used to argue a great deal and jostle for position in the family. Three of them were similar in age, two of them were twins, and the cloudy brave was one year younger. He always felt aggrieved that the twins seemed to have all the power in his household, and he had none.

One day the twins had gone hunting and had come back with nothing. Dark Water had managed to catch a small deer by himself. They had stolen it from him and had taken it as their quarry to show their mother, She always sided with them, and insulted our cloudy brave. He was mortally offended.

Dark Water went away to brood on his hatred. He disappeared for several days. His brothers felt guilty about what had happened and after much questioning from their mother, they admitted what they had done. Their mother turned pale.
“How could you treat your brother thus? This is not the way of the Great Spirit, to steal his glory to cover up your own failure. Shame! Go and find him, and don’t come back until you do.”

The twins set off to look for Dark Water. Their hearts were heavy, they knew he was a deeply resentful character. They wondered about their own safety. Perhaps he would kill one or both of them when he saw them. They realised that over the years they had given him enough cause for resentment, and now finally they had begun to regret it.
“But surely our brother would never kill us!” said one.

“Why not? He has nothing to lose if he has decided to leave the tribe anyway.”
“Do you really think he would?”
“I would not blame him if he did.We have dishonoured him. We have cheated him.”
“When we see him how are we going to know what is in his heart?”

“Whatever it is it will not be good.”

“Do you think we should kill him first, so that he cannot kills us?”

“Well, it would solve the problem.  He would not come back and brood and threaten us like he always does.”

“But what if he does not plan to kill us and we kill him?”

“Then we will have to pay the penalty to the Great Spirit.”

The two continued in this vein as they traversed the countryside. No sign was to be seen of their brother. Further and further they went, looking for foot prints, for campfires, for signs of blood from a killing. They found nothing.
They decided to return, their fear beginning to lessen. Perhaps they would not have to face this dreadful decision to kill or be killed. They returned to camp. The twins found their mother very distraught.

“I have had a terrible dream.” she said. “I dreamt that you two killed your brother and returned, saying nothing to me. Then you went off on a hunting expedition, and you were both shot by the hunters’ arrows. What does all this mean? We must ask the chief.” The little family went to the chief and explained shamefacedly what had happened. The twins did not divulge their conversation about killing their brother. They were by now very frightened young men.

The chief sat quietly for some minutes with his eyes closed. Finally, “Yes,” he said, “I can see your brother. He is hiding in a tree just outside the camp. His heart is full of sorrow. He does not want to return to a loveless home where he is not appreciated, but he does not want to leave the tribe. What are you going to do about it?”  He looked directly at the twins.  They hung their heads in shame, greatly relieved that they had not actually killed their brother, and that their mother’s vision had only been a dream. They were very glad of the chance to make amends. 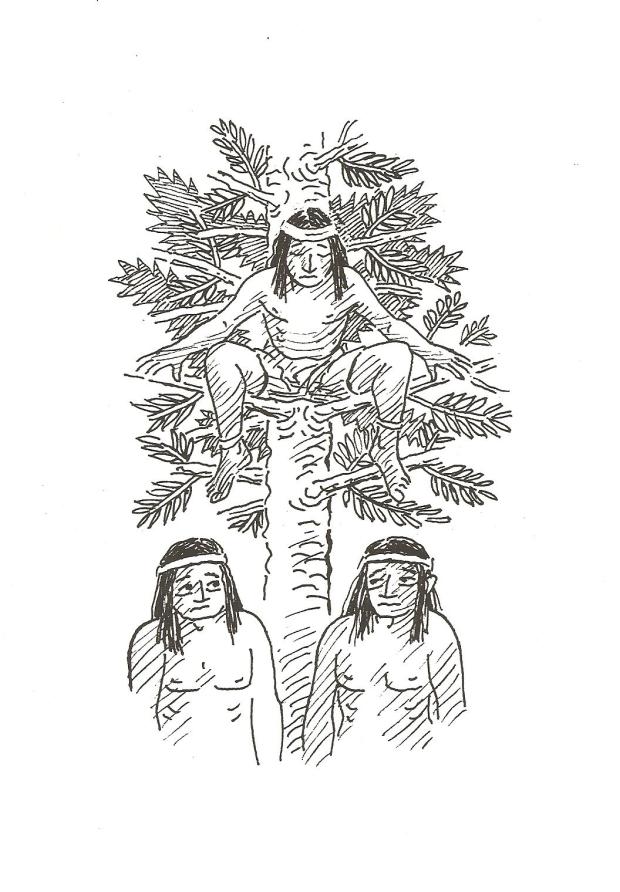 He is hiding in a tree just outside the camp

The family walked round the camp, calling their brother encouraging him to appear. Finally he emerged looking tired and drawn.
His mother enfolded him in her arms and begged forgiveness for neglecting him and for indulging the twins. The twins handed him their best weapons, a beautiful bow and a tomahawk, in recompense for their bad treatment of him. The youngest boy, just a child, held his brother’s hand as they all returned to the camp. The Great Spirit had saved them from the abomination of committing murder; never again did they harbour such black thoughts in their hearts.

There was no controversy amongst those who knew it was wrong to kill any one you knew, but when it came to territorial struggles, or power struggles with other tribes, and blood was shed, who was in the right? Was ‘might’ right, or did the ‘ meek inherit the earth’? Of course we did not have your Bible, or your way of doing things. Might, in general, was right, but most tribes were not pugnacious. They were peace loving and respected the lives of all people whether they were of their own tribe or not.

Search for subjects in this blog